‘OUR YOUTH, OUR FUTURE’

UNAIDS estimates that there are 320,000 adolescents living with HIV in South Africa – this is the highest in the world. And with more than half of all HIV infections occurring in young people between the ages 15 and 24, the HIV epidemic in South Africa has largely become a youth epidemic. At the same time as we care for our children born with HIV as they grow up, we need to care for those who contract HIV in adolescence and protect those who are HIV negative from becoming infected.

Young people in South Africa represent a positive force in society, but they also face many challenges. Young people are also exposed to risks and pressures that can lead to early and unintended pregnancy, other sexually transmitted infections (STIs) and smoking, drug or alcohol dependency. Many are also exposed to violence and exploitative situations. It is unacceptable that young people in South Africa, who account for a significant proportion of the total population, continue to face disturbingly high life chances of morbidity and early death.

Adolescents living with HIV are often denied HIV services or are unable to access them due to age and behavior related discrimination, gender and socio-economic inequalities. HIV-positive children are growing up and entering adolescence as a result of the successful provision and scale-up of combined antiretroviral therapy (cART) to children. Importantly, as the number of adolescents living with HIV continues to increase, healthcare providers will need to acquire new skills to help them to remain on cART and navigate the transition to adulthood.

Our own experience from ten years of working in South Africa with children and young people living with HIV has highlighted several key factors that prevent public health services from meeting the needs of young people with HIV. These include:

To address these issues public health facilities must be transformed into better performing adolescent and youth-friendly clinics. CHIVA Africas Our Youth, Our Future programme for adolescents was set up because we believe that once a life has been saved, we have a responsibility to make it one worth living.

Our dedicated teams of youth facilitators deliver a ten-month mentoring and teaching programme to each clinic.

Each day spent with a health facility is geared towards achieving agreed government targets for Adolescent and Youth Friendly Services (AYFS). More importantly, by the end of the programme each facility will be delivering services which help young people living with HIV to fulfil their potential, as well as providing comprehensive Sexual and Reproductive Health education, HIV prevention and health education to all adolescents and youth accessing their services.

Our belief is that all adolescents are entitled to receive quality healthcare services; for both treatment and prevention of disease. We work to build relationships of engagement and cooperation between clinic staff, young people and civil society at large to improve accountability, promote mutual understanding and cooperation, and shared ownership of challenges, successes and actions needed to sustain quality service provision. Through increasing the skills and capacity of all, the desire to provide quality treatment and prevention for all adolescents and youth will be realised. Whilst our programme addresses key challenges affecting adolescents with HIV (including access and retention on ART, disclosure and sexual and reproductive health issues), we work to ensure that facilities are educated and skilled to provide treatment and prevention services for all adolescents (including those with non-communicable diseases).

The implementation of our model is in partnership with the District Department of Health that we are supporting; who work alongside other government partners (including Departments of Social Development and Basic Education) and civil society to develop and deliver services to adolescents. This promotes ownership of the programme by our DOH partners, enables understanding of core components of AYFS at district level, and increases their ability and commitment to both sustaining selected clinic service delivery and roll-out of support to other clinics under their management. 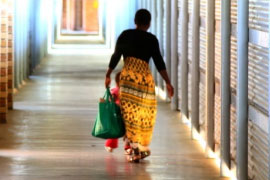 We have produced resources which cover all aspects of ‘Our Youth, Our Future’ programme. Please click here to view these in our Resource Library.

The David and Elaine Potter Foundation are new funders for 2016 and are funding the overall organisation, supporting our vision to ensure children and young people living with HIV receive the care they need to live long healthy lives.

The Mercury Phoenix Trust started funding us in 2016 and are supporting our ‘Our Youth, Our Future’ project in eThekwini

With the support of The Nuffield Foundation we were able to support the implementation of the Department of Health’s down-referral plan from hospitals to Primary Health Clinics (PHCs) in the Dr. Kenneth Kaunda District (DKK) of the Northwest Province (NWP). This district has the highest HIV prevalence in the province.

We work to support the educational efforts of the Nelson R Mandela Medical School at the University of KwaZulu-Natal through contributing to the delivery of their HIV, child and adolescent health-related courses and conferences

We have worked in Dr Kenneth Kaunda District of the North West Province at the request of the Provincial Department of Health since 2010 through funding provided by the Nuffield Foundation that completes at the end of 2015. We are working to secure further funding to continue our work in 2016 and beyond

Provincial Department of Health in KwaZulu-Natal

Since our inception in 2004, our lead partner has been the Provincial Department of Health in KwaZulu-Natal. The focus of all our work is guided by the relevant directorates within the Department, ensuring we remain relevant and dedicated to addressing areas of greatest need.

We use cookies to ensure that we give you the best experience on our website. If you continue without changing your settings, we'll assume that you are happy to receive all cookies from this website. If you would like to change your preferences you may do so by following the instructions here.Accept